From Wikipedia, the free encyclopedia

The fire triangle.
The fire triangle or combustion triangle is a simple model for understanding the ingredients necessary for most fires.[1] It has been replaced in the fire fighting and protection industry partially by the fire tetrahedron (see below).
The triangle illustrates a fire requires three elements: heat, fuel, and an oxidizing agent (usually oxygen). The fire is prevented or extinguished by removing any one of them. A fire naturally occurs when the elements are combined in the right mixture.


Without sufficient heat, a fire cannot begin, and it cannot continue. Heat can be removed by the application of a substance which reduces the amount of heat available to the fire reaction. This is often water, which requires heat for phase change from water to steam. Introducing sufficient quantities and types of powder or gas in the flame reduces the amount of heat available for the fire reaction in the same manner. Scraping embers from a burning structure also removes the heat source. Turning off the electricity in an electrical fire removes the ignition source.

Without fuel, a fire will stop. Fuel can be removed naturally, as where the fire has consumed all the burnable fuel, or manually, by mechanically or chemically removing the fuel from the fire. Fuel separation is an important factor in wildland fire suppression, and is the basis for most major tactics, such as controlled burns. The fire stops because a lower concentration of fuel vapor in the flame leads to a decrease in energy release and a lower temperature. Removing the fuel thereby decreases the heat.

Without sufficient oxygen, a fire cannot begin, and it cannot continue. With a decreased oxygen concentration, the combustion process slows. In most cases, there is plenty of air left when the fire goes out so this is commonly not a major factor. The fire tetrahedron
The fire tetrahedron is an addition to the fire triangle. It adds the requirement for the presence of the chemical reaction which is the process of fire. For example, the suppression effect of Halon is due to its interference in the fire chemical inhibition.
Combustion is the chemical reaction that feeds a fire more heat and allows it to continue. When the fire involves burning metals like lithium, magnesium, titanium,[2] etc. (known as a class-D fire), it becomes even more important to consider the energy release. The metals react faster with water than with oxygen and thereby more energy is released. Putting water on such a fire results in the fire getting hotter or even exploding because the metals react with water in an exothermic reaction. Carbon dioxide extinguishers are ineffective against certain metals such as titanium.[2] Therefore, inert agents (e.g. dry sand) must be used to break the chain reaction of metallic combustion. In the same way, as soon as we remove one out of the 3 elements of the triangle, combustion stops.

Main article: Fire classes
Based on the combustible material involved, the fire can be classified as:

The oxidizer is the other reactive of the chemical reaction. In most cases, it is the ambient air, and in particular one of its components, dioxygen (O2). By depriving a fire of air, we extinguish it; for example, when covering the flame of a small candle with an empty glass, fire stops; to the contrary, if we blow over a wood fire, we activate it (by bringing more air). In certain torches, we bring dioxygen to improve combustion. In certain very particular cases (such as explosives like aluminum), the oxidizer and combustible are the same (i.e.nitroglycerin, an instable molecule made of one oxidizing part linked to a reducing part). Reaction is initiated by an activating energy, in most cases, it is heat. Several examples include friction, as in case of matches, heating an electrical wire, a flame (propagation of fire), or a spark (from a lighter or from any starting electrical device). There are also many other ways to bring sufficient activation energy including electricity, radiation, and pressure, all of which will lead to a temperature rise. In most cases, heat production enables self-sustainability of the reaction, and enables a chain reaction to grow. The temperature at which a liquid produces sufficient vapor to get a flammable mix with self-sustainable combustion is called its flash-point.


[edit] Extinction of the fire

To stop a combustion reaction, one of the three elements of the fire-triangle has to be removed: • Suppression of the Combustible: by closing of the valve fueling the combustion, creating sufficient distance between fire and flame, exhausting hot smoke (containing unburned elements), … • Suppression of the Oxidizer (also known as choking): by the use of a carbon dioxide fire-extinguisher, a blanket, or spraying sufficient water on a solid combustible (water vapor removes fresh air) … • Suppression of the Activation Energy (cooling down): by spraying water in a mix of air + combustible particles), net absorbing the heat ("Davy" miner lamp), exhausting to remove hot smoke, …


[edit] Role of water in fire-fighting

Water can have two different roles: 1- In the case of a solid combustible, the limitation factor is the oxidizer (air) intake, as the fire itself produces sufficient heat; water chokes the fire by vapor production, which removes fresh air and oxygen; 2- In the case of a mixed atmosphere, the combustible can not be separated from the oxidizer, the only possible action consists of cooling down to prevent the spread of flames (water vapor will also dilute the atmosphere). There also exist cases where the ignition factor is not the activation energy. For example, smoke explosion is a very violent combustion of unburned gases contained in the smoke created by a sudden fresh air input (oxidizer input). The interval in which an air/gas mix can burn is limited by the explosivity limits of the air. This interval can be very small (kerosene) or large (acetylene).

The role of water in extinguishing a fire can be summarized as follows: - Cooling down the fire by absorption of heat energy - Removing oxygen from the fire - Diluting the atmosphere by adding vapor inside the flammable air mixture The main limits to the use of water are directly linked to the physical-chemical characteristics of water itself: - Water can’t be used on certain type of fires : o Hydrocarbon fires (B class) - as it will only spread the fire because of the difference in density o Metal fires (D class) - as these fires produce huge amounts of energy (up to 7.550 calories/kg for Aluminum) and water can also create violent chemical reaction with burning metal (by oxidization) o Fat fires (F class) - as vapor will carry and spread burning oil everywhere. Since these reactions are well-understood, it has been possible to create specific water-additives which will allow: o A better heat absorption with a higher density than water o Carrying free radical catchers on the fire o Carrying foaming agents to enable water to stay on the surface of a liquid fire and prevent gas release o Carrying specific reactives which will react and change the nature of the burning material Water-additives are generally designed to be effective on several categories of fires (class A + class B or even class A + class B + class F), meaning a better global performance and polyvalence of the fire-extinguisher.

Combustion is a chemical reaction in which complex molecules are broken down into smaller, more stable molecules through a rearrangement of atomic bonds. A major component of the chemistry of high-temperature combustion involves radical reactions. However, it is possible to consider combustion as a single overall reaction.
Example  : H3C-CH2-CH3 + 5O2 → 3CO2 + 4H2O
Carbon dioxide and water are more stable than oxygen and propane. Combustion is an oxidation-reduction reaction, meaning oxidization of a combustible by an oxidizer; • combustible is being oxidized during combustion, it is a reducer as it loses electrons; • Oxidizer is the part being reduced; it is an oxidizer as it gains electrons. As with any chemical reaction, a catalyst encourages combustion and as it has a high activation energy level, the use of a catalyst enables working at lower temperature. This leads to more complete combustion as in the catalyst of the exhaust of a car, where catalytic metals burn residues contained in the exhaust smoke at lower temperature than in the engine. Concerning solid combustible, the activation energy allows for vaporization or pyrolysis of the combustible. Gas produced will then mix with an oxidizer resulting in a combustible mixture. If the energy produced by the combustion is higher or equal to the quantity of energy required for the combustion, the reaction is then self-sustainable.

For any fire to occur, there must be fuel, ignition and
oxygen (Classic Fire Triangle). However, for a
combustible dust explosion, you must also add
dispersion and confinement — the “Dust Explosion
Pentagon.” Removal of any one element prevents an
explosion, though not necessarily a fire. 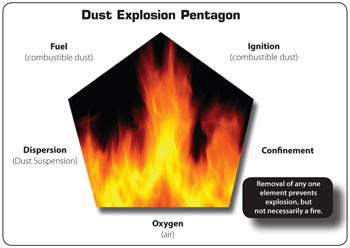 Popular posts from this blog


Many people working in safety instrumented system (SIS) project development, execution, operation and maintenance treat a functional safety audit (FS Audit) and a functional safety assessment (FSA) as one and the same. So, based on this assumption, they simply ensure that such an activity is undertaken and perhaps signify the need to perform this evaluation at some point when it appears as a milestone on the project schedule. Moreover, often they call upon someone working on the project,
who may or may not have had some previous experience in quality auditing, to deliver this audit/assessment. However, this is not a reasonable approach because the concepts for the audit and assessment markedly differ.


An FS Audit provides a systematic and independ…
Read more

Made from the dried bark of Cinnamomum verum, a tree indigenous to Sri Lanka, cinnamon's exotic perfume and subtle flavor come from its two major components: cinnamaldehyde and eugenol. These two chemicals are volatile, meaning they readily vaporize at temperatures comfortable to humans, which is in fact why cinnamon is so fragrant. But those same vapors are also highly combustible (indeed, combustion only happens in the presence of vapors), making cinnamon a highly flammable material under the right conditions.

Now a cloud of cinnamon dust isn’t the kind of thing most people would consider dangerous, but add enough heat and you’ll quickly have an expanding ball of fire known as a dust explosion. For dealing with this situation, we can only recommend a good pair of running shoes. In fact, the federal Occupational Safety and Health Administration issues warnings about cinnamon explosions in food manufacturing plants. Here, w…
Read more